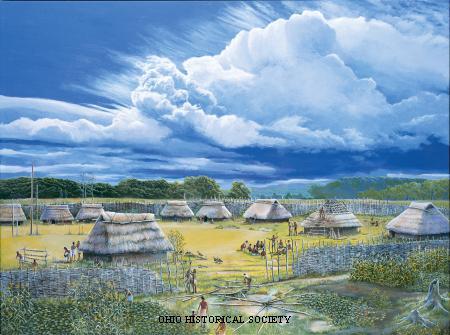 This painting depicts part of the SunWatch Indian Village Site, a Fort Ancient village along the Great Miami River in Montgomery County. Also known as the Incinerator Site, it was built around A.D. 1200. Understanding such a large, complex community has required the combined efforts of archaeologists from the Dayton Museum of Natural History, botanists, zoologists, and physical anthropologists for more than a decade.

A stockade about 420 feet around protected the community. Concentric circles of rectangular houses, food storage and trash pits, and burial pits surrounded a plaza. That space was left vacant except for buildings thought to be sweat lodges, sauna-like huts used for body purification or treating illness. At the very center of the plaza, the villagers had erected a large red cedar pole surrounded by four smaller ones. The shadows of the poles may have tracked the movements of the sun to determine the best time for planting crops.

Archaeologists have rebuilt some of the prehistoric houses and planted some of the crops grown there in order to learn more about Fort Ancient village life in the 9th century.