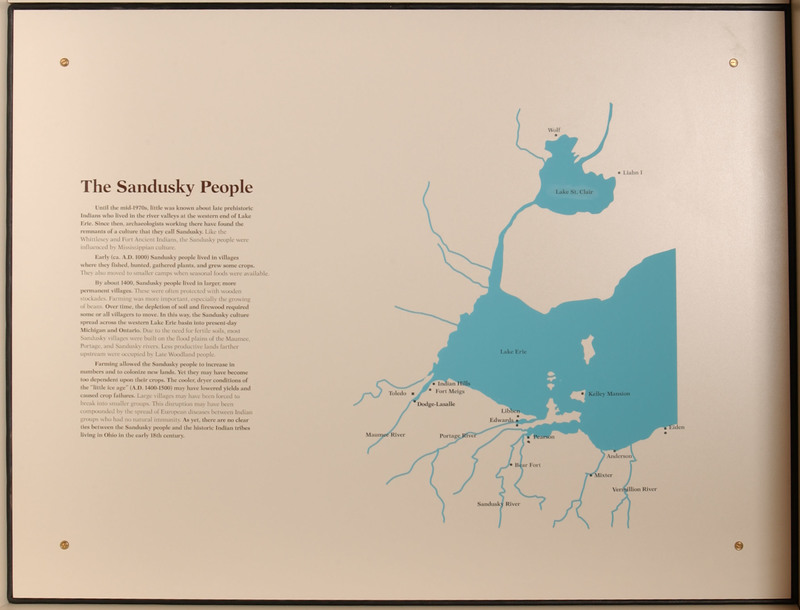 Early (ca. A.D. 1000) Sandusky people lived in villages where they fished, hunted, gathered plants, and grew some crops. They also moved to smaller camps when seasonal foods were available.

By about 1400, Sandusky people lived in larger, more permanent villages. These were often protected with wooden stockades. Farming was more important, especially the growing of beans. Over time, the depletion of soil and firewood required some or all villagers to move. In this way, the Sandusky culture spread across the western Lake Erie basin into present-day Michigan and Ontario. Due to the need for fertile soils, most Sandusky villages were built on the flood plains of the Maumee, Portage, and Sandusky rivers. Less productive lands farther upstream were occupied by Late Woodland people.

Farming allowed the Sandusky people to grow in numbers and to colonize new lands. Yet they may have become too dependent upon their crops. The cooler, dryer conditions of the "Little Ice Age" (A.D. 1400-1600) may have lowered yields and caused crop failures. Large villages may have been forced to break up into smaller groups.

This disruption may have been compounded by the spread of European diseases between Indian groups who had no natural immunity. As yet, there are no clear ties between the Sandusky culture and the historic Indian tribes living in Ohio in the early 18th century.