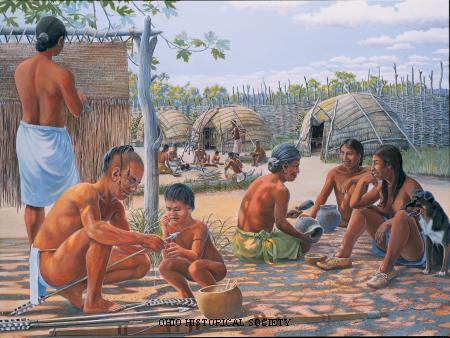 Current research suggests that Early and Middle Woodland people moved from site to site as the seasons changed, much like the Archaic groups. Later on, the time spent in one place may have lengthened so the people could tend to their crops. By about A.D. 600, Late Woodland peoples lived in permanent villages. However, they may have traveled to remote camps to collect nuts in the fall or fish in the spring.

Since few Woodland living sites have been fully studied, it is difficult to be certain about the types of houses built and how they were arranged within a village. A Late Woodland village near Dayton, dating between A.D. 600 and 900, contained at least four circular houses, each about 40 feet wide. The houses were set in a row along the edge of a small stream valley. This image shows a typical Late Woodland village.

The remnants of Woodland houses that archaeologists have found in Ohio vary in shape. Some are circular; others are oval, square, or rectangular. Based on their study of historic Indian dwellings, archaeologists believe that the walls and roofs of Woodland houses were made of wooden posts or poles covered with bark, woven mats, or both. Most seem to have been used by a nuclear family (parents and children) or an extended family (parents, children, grandparents, and perhaps an aunt or uncle).