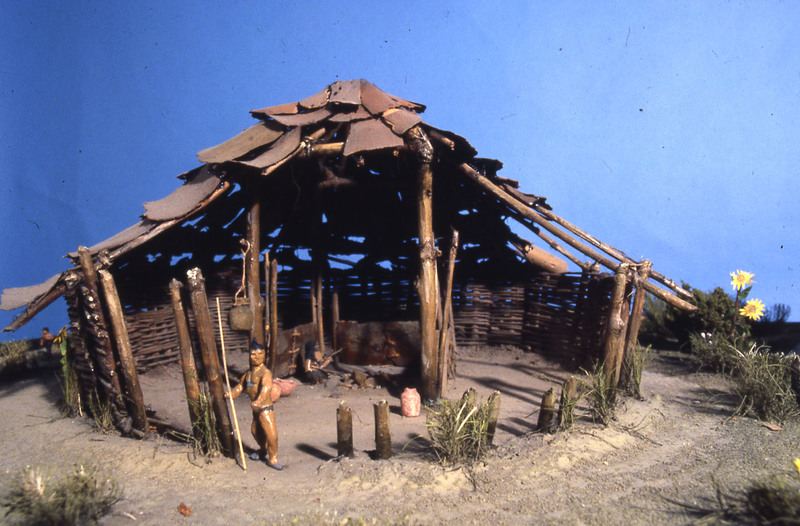 This replica of part of an Adena mortuary structure is based on a post-hole pattern found beneath the Niles-Wolford mound in Pickaway County, Ohio. The building was circular, measuring 16 feet by 18 feet. The materials covering the walls and roof of the replica, plus the activities shown inside are based on archaeological evidence as well as the practices of historic Indians.

Houses such as this one strongly suggest that while Adena groups might split up during parts of the year, life centered more and more on semi-permanent villages. Unfortunately, no Adena village sites have been thoroughly studied to determine how large they might be, how long they existed, or how close the houses were to each other. Also, it is not known if mounds were always built within Adena communities or away from them. Studies of places such as the Buckmeyer site in northeast Perry County, Ohio, are especially important in this regard. Although partially disturbed by a bulldozer, the site did yield the remnants of a Late Adena house. By noting the relationship of Buckmeyer to Adena mounds and other possible living sites in the area, archaeologists can begin to answer some of these questions. Several Early Woodland village sites found in northern Ohio and southern Michigan have also provided useful information.