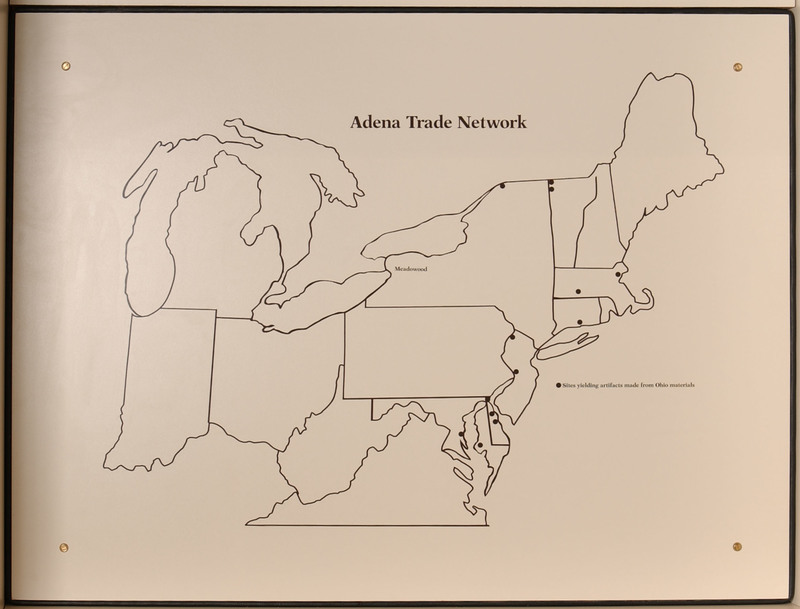 Late Archaic groups had engaged in trading such items as Lake Superior copper and marine shells for nearly 1000 years before the Adena. Trade continued during Early Woodland times with even more goods. It was not just the Adena of the Ohio Valley who were trading objects. In western New York, the Meadowood culture had access to excellent sources of Onondaga chert. Leaf-shaped blades, often large caches of them made from this chert were traded in New England, New Jersey, eastern Pennsylvania, Ontario, and as far west as Michigan.

How these trade networks worked and their importance to the people involved is difficult to know. Some suggest that as Early Woodland Indians began to live longer in one place, their territories became smaller. Thus, their access to a wide range of raw materials was restricted. In order to maintain supplies of these materials, the people set up trade links with other groups.

Perhaps these links were based on kinship. Or perhaps, in this chicken and egg situation, trade contacts led to intergroup marriages or formal trading partnerships. At any rate, the occasions when objects were exchanged were probably important social events. There may have been feasting, redistribution of food, and ceremonies affirming intergroup ties. These events may have enhanced the status of those who could acquire exotic goods through trade and redistribute the items within their own groups.