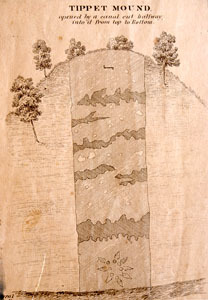 Archaeologists believe the Adena people built their mounds to show respect for those buried in them. The size of the mound and the elegance of the grave are thought to be indications of the status of the deceased. Single families or clans may have used specific mounds for generations, much like family plots in modern cemeteries. Other mounds were specially built to cover only one burial.

Archaeologists can determine the sequence in which a mound was built by carefully observing soil layers and the relative positions of the burials in it. The Cresap mound, along the Ohio River in West Virginia, is a good example. The ground plans and cross sections shown here illustrate the sequence of events at this site of Adena mortuary ritual. The first burials were on the floor of a circular wooden ritual structure or in shallow graves below it. Later, the wooden structure was torn down and burials were placed in low mounds of earth above the first graves. Periodically, more layers of soil were added to cover later burials until the mound was nearly 17 feet high and 70 feet across.