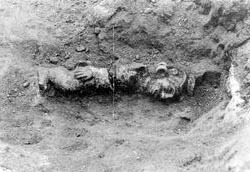 The figure is wearing a distinctive loincloth carved with a bustle of feathers similar to the tail feathers on the Berlin tablet. The curving lines on the front of the loincloth may also relate to that bird-of-prey motif. In the figure's pierced ear lobes are large earspools that are typical of the later Hopewell culture. The curving surfaces on the top of the head may represent a roach hairstyle with the head shaved on each side of a band of hair.

While it is easy to describe the Adena Pipe, it is much harder to assess its place in Adena culture. It is clearly the work of a skilled craftsman, yet no other human effigies have been found. In a sense it is symbolic of Ohio's ancient Indian cultures -- sophisticated, complex, and difficult to fully comprehend.