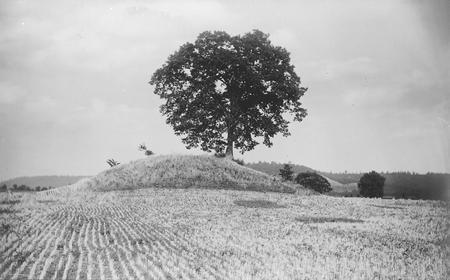 Eventually, the occupants of the Seip complex decided to abandon the large charnel house. They dismantled it and covered each of the 3 compartments with a mound of earth, depositing objects and even a few more burials along with the soil. Finally, they covered the mounds with a layer of gravel (the inner ring of pebbles on the model). They later capped the 3 mounds with more soil, forming one mound. Around the base of this outer mound, the people built a low wall of large stone slabs (the outer row of pebbles). Spreading a layer of gravel over the entire mound was the last step.

Recently, archaeologists from Northwestern University and the Cleveland Museum of Natural History reexamined materials from Seip mound. They concluded that each of the 3 building compartments was the burial area for a particular social group. They also concluded that copper earspools, breastplates, and pearls were special symbols of social status among the Hopewell people using the Seip Earthworks complex.