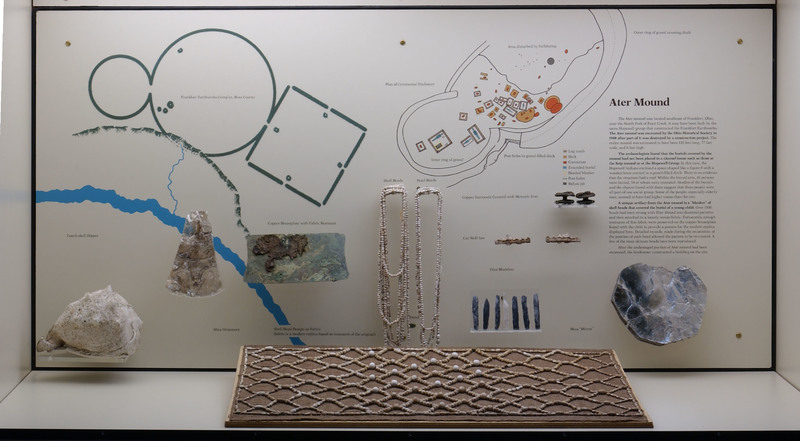 The Ater mound was located southeast of Frankfort, Ohio, near the North Fork of Paint Creek. It may have been built by the same Hopewell group that constructed the Frankfort Earthworks. The Ater mound was excavated by the Ohio Historical Society in 1948 after part of it was destroyed by a construction project. The entire mound was estimated to have been 120 feet long, 77 feet wide, and 6 feet high.

The archaeologists found that the burials covered by the mound had not been placed in a charnel house such as those at the Seip mound or at the Hopewell Group. In this case, the Hopewell culture enclosed a space shaped like a figure 8 with a wooden fence erected in a gravel-filled ditch. There is no evidence that the structure had a roof. Within the fenced area, 61 persons were buried, 54 of whom were cremated. Studies of the burials and the objects found with them suggest that these people were all part of one social group. Some of the people, especially elderly men, seemed to have had higher status than the rest.

A unique artifact from the Ater mound is a "blanket" of shell beads that covered the burial of a young child. Over 1500 beads had been strung with fiber thread into diamond patterns and then attached to a loosely woven fabric. Fortunately, enough remnants of that fabric were preserved on the copper breastplate found with the child to provide a pattern for the modern replica displayed here. Detailed records, made during the excavation, of the position of each bead allowed the pattern to be re-created. A few of the most delicate beads have been reproduced

After the undamaged portion of Ater mound had been excavated, the landowner constructed a building on the site.