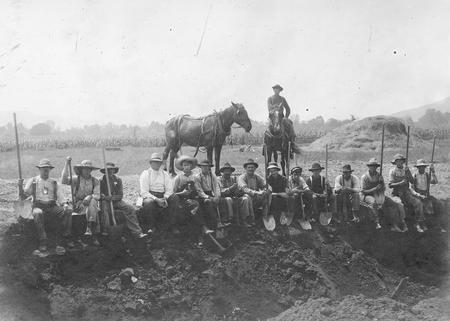 Some archaeologists believe that the Hopewell people lived year around at their earthwork complexes. Others think that only small groups resided at each site all of the time. The rest of the people lived in villages scattered through the river valleys. They traveled to the earthworks only at certain times of the year.

Excavations at the Seip Earthworks have unearthed middens (household refuse dumps) near the walls. However, much more work is required to determine whether the refuse is from long-term or periodic occupation.

The people needed shelter and food regardless of how long they lived at a complex. The large river valleys of southern Ohio, where most of the earthworks were built, were rich in natural resources. The shelters in which they lived may have varied from temporary lean-tos to more substantial houses.

The Hopewell women grew crops of seed-bearing plants. They also collected wild plants and nuts. The men provided meat from animals and fish. It is likely that, while the men were building the earthworks, the women prepared the meals, made everyday pottery, and continually collected firewood.