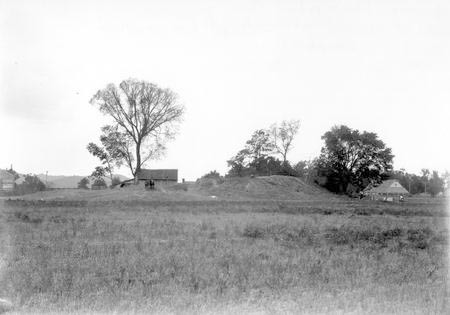 The Harness mound was 160 feet long, 80 feet wide, and 20 feet high. It was excavated to varying degrees in the 1840s, the 1850s, 1885, 1897, 1903, and 1905. Most of the objects displayed here are from the last two excavations, done by the Ohio Historical Society. The early excavators noted that the mound covered the foundations of a building that contained the burials of 174 persons, all but 10 of whom had been cremated.

In 1976 and 1977, archaeologists from the Cleveland Museum of Natural History examined the base of the mound before it was leveled for farming. The complete pattern of the building was found during that study. It, too, combined squares and circles. Some archaeologists believe that each compartment of the building was used for a variety of social events by different groups of the people who maintained the Liberty Earthworks.

Modern excavation methods and analytical techniques provide details of the house construction. The Hopewell builders had scraped away the topsoil and replaced it with layers of clay to form the floor. Most of the posts were hickory saplings; some of them may have been decorated with red paint to mark entrances or special areas within a room.

Radiocarbon dates on charcoal from pits within the building suggest that it was being used between A.D. 265 and 395.