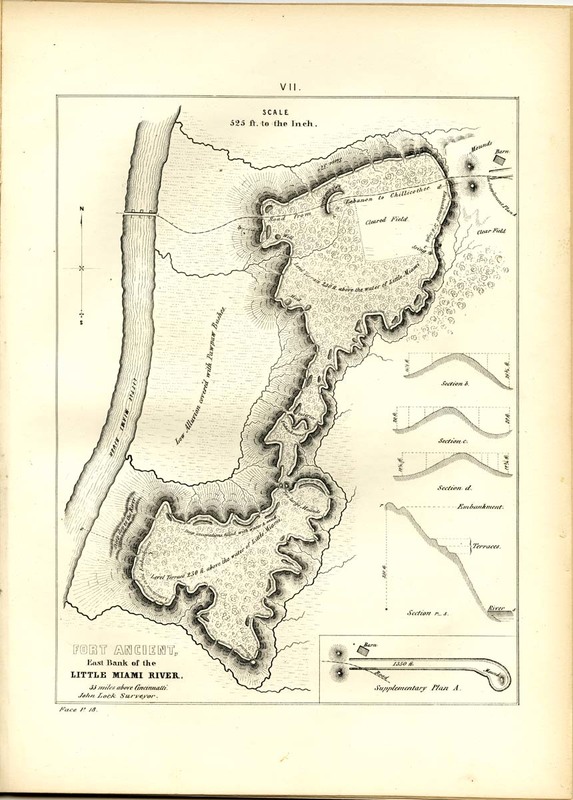 The Fort Ancient Earthworks is located on a mesa above the Little Miami River near Lebanon, Ohio. It is an example of a class of Hopewell sites known as hilltop enclosures. For many years, these sites were thought to have been built for defense. However, their large size and the many openings in the walls argue against their being used for military purposes.

Fort Ancient includes mounds, crescent-shaped earthworks, stone circles and pavements, and a pair of parallel walls. Similarities between Fort Ancient and other Hopewell earthworks suggest that the site was built for social and ceremonial purposes. Artifacts found there clearly identify the site as Hopewell. Unfortunately, the name of the site has been given to a later culture of Native Americans, the Fort Ancient people. Some Fort Ancient people did indeed live at the site but not until 1000 years after it had been built by the Hopewell culture.

The nearly 3-1/2 miles of earthworks are made of soil and rocks. However, studies by archaeologists from the University of Florida suggest that the 3 major parts of the site were not built at the same time. There are at least 72 openings in the walls. Many of them provide easy access to the valley below. Within Fort Ancient are 3 "Great Gateways" that are major passages from one part of the enclosure to another. These gateways are flanked by mounds or stone pavements.

Near the parallel walls northeast of the enclosure, archaeologists from the Ohio Historical Society found remnants of Hopewell living sites including pottery and flint bladelets. In the same area, a local resident discovered a cache of over 100 sheets of cut mica, several broken stone ornaments, and numerous copper objects. Many of them had been bent and broken on purpose. Several of the artifacts from that cache are displayed here. Another cache found recently includes knives made from obsidian, quartz, and Indiana flint.

In 2005, archaeologists using remote sensing technology discovered evidence of a large circular structure nearly 200 feet in diameter. This may be the remnants of a previously unrecorded earthwork or a circular pattern of post holes of a "woodhenge." The archaeologists also found evidence of possible houses, pits and other ancient activities.

Because of its significance, Fort Ancient was purchased by the state of Ohio in 1891 and became Ohio's first state park; it is presently administered by the Ohio Historical Society.