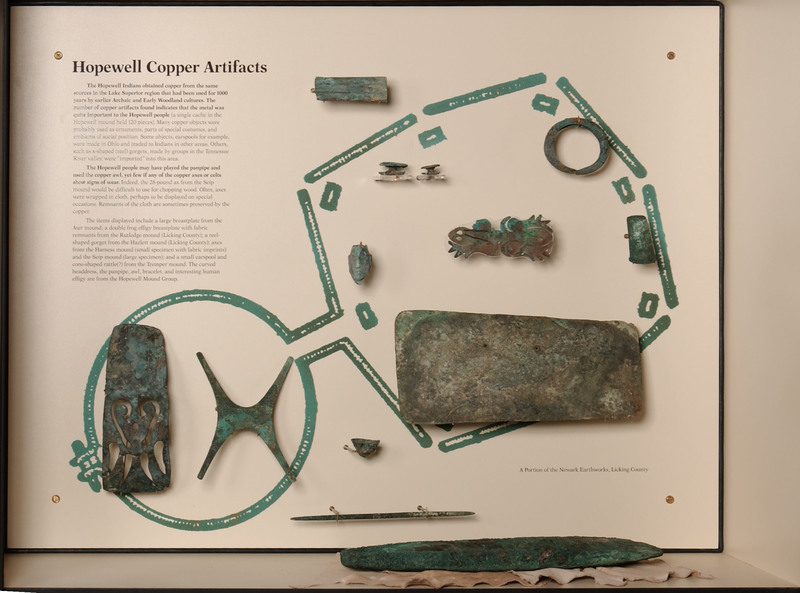 The Hopewell culture obtained copper from the same sources in the Lake Superior region that had been used for 1000 years by earlier Archaic and Early Woodland cultures. The number of copper artifacts found indicates that the metal was quite important to the Hopewell culture (a single cache in the Hopewell mound held 120 pieces).

Many copper objects were probably used as ornaments, parts of special costumes, and emblems of social position. Some objects, earspools for example, were made in Ohio and traded to Indians in other areas. Others, such as x-shaped (reel) gorgets, made by groups in the Tennessee River valley, were "imported" into this area.

The items displayed include a large breastplate from Ater mound; a double frog effigy breastplate with fabric remnants from Rutledge mound (Licking County); a reel-shaped gorget from Hazlett mound (Licking County); axes from Harness mound (small specimen with fabric imprints) and Seip mound (large specimen); and a small earspool and cone-shaped object (possibly a rattle) from Tremper mound. The curved headdress, the panpipe, awl, bracelet, and interesting human effigy are from the Hopewell Mound Group.