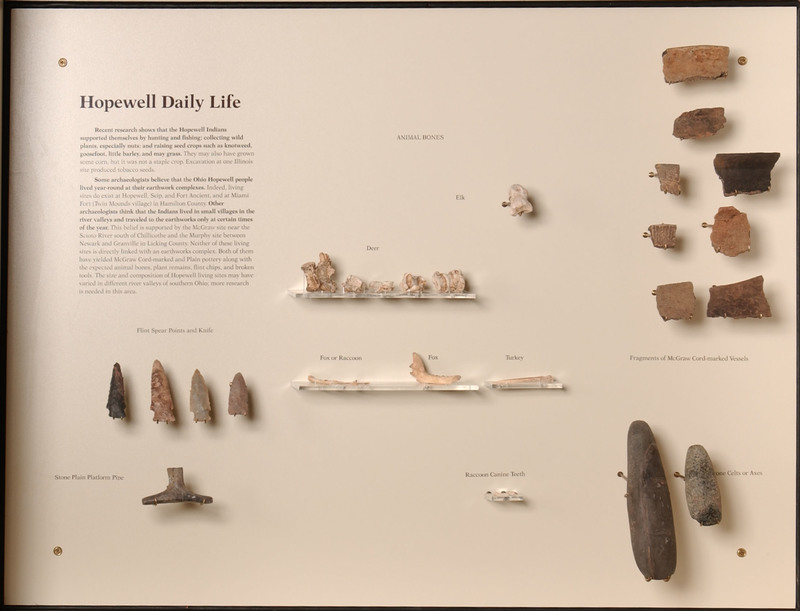 Recent research shows that the people of the Hopewell culture supported themselves by hunting and fishing; collecting wild plants, especially nuts; and raising seed crops such as knotweed, goosefoot, little barley, and maygrass. They may also have grown some corn, but it was not a staple crop. Excavation at one Illinois site produced tobacco seeds.

Some archaeologists believe that the Ohio Hopewell people lived year-round at their earthwork complexes. Indeed, living sites do exist at Hopewell, Seip, and Fort Ancient, and at Miami Fort (Twin Mounds village) in Hamilton County. Other archaeologists think that the Indians lived in small villages in the river valleys and traveled to the earthworks only at certain times of the year.

This belief is supported by the McGraw site near the Scioto River south of Chillicothe and the Murphy site between Newark and Granville in Licking County. Neither of these living sites is directly linked with an earthwork complex. Both of them have yielded McGraw Cord-marked and Plain pottery along with the expected animal bones, plant remains, flint chips, and broken tools. The size and composition of Hopewell living sites may have varied in different river valleys of southern Ohio; more research is needed in this area.