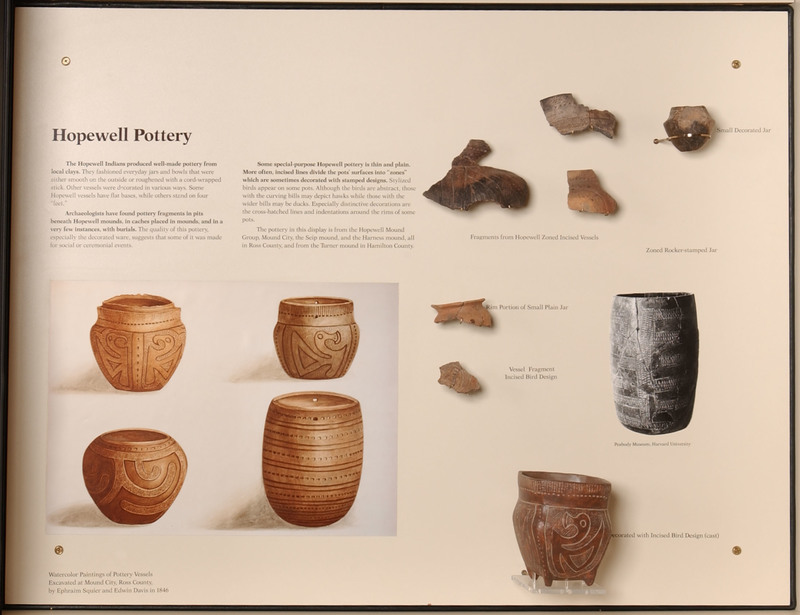 The Hopewell culture produced well-made pottery from local clays. Hopewell potters, probably women, fashioned everyday jars and bowls that were either smooth on the outside or roughened with a cord-wrapped stick. Other vessels were decorated in various ways. Some Hopewell vessels have flat bases, while others stand on four "feet.''

Archaeologists have found pottery fragments in pits beneath Hopewell mounds, in caches placed in mounds, and in a very few instances, with burials. The quality of this pottery, especially the decorated ware, suggests that some of it was made for social or ceremonial events.

Some special-purpose Hopewell pottery is thin and plain. More often, incised lines divide the pots' surfaces into "zones" which are sometimes decorated with stamped designs. Stylized birds appear on some pots. Although the birds are abstract, those with the curving bills may depict hawks while those with the wider bills may be ducks. Especially distinctive decorations are the cross-hatched lines and indentations around the rim of some pots.

The pottery in this display is from the Hopewell Mound Group, Mound City, the Seip mound, and the Harness mound, all in Ross County, and from the Turner mound in Hamilton County.