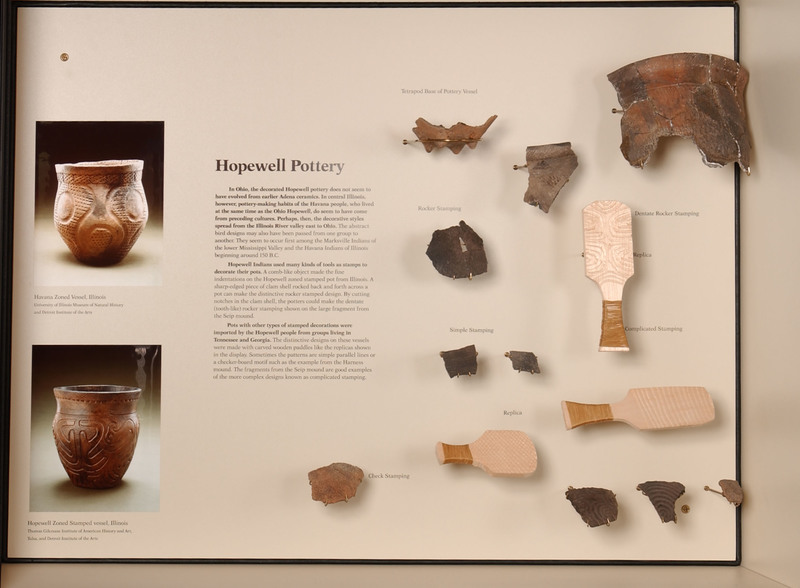 In Ohio, the decorated Hopewell pottery does not seem to have evolved from earlier Adena ceramics. In central Illinois, however, pottery-making habits of the Havana culture, which lived at the same time as the Ohio Hopewell, do seem to have come from preceding cultures. Perhaps, then, the decorative styles spread from the Illinois River valley east to Ohio. The abstract bird designs may also have been passed from one group to another. They seem to occur first among the Marksville Indians of the lower Mississippi Valley and the Havana culture of Illinois beginning around 150 B.C.

Hopewell potters used many kinds of tools as stamps to decorate their pots. A comb-like object made the fine indentations on the Hopewell zoned stamped pot from Illinois. A sharp-edged piece of clam shell rocked back and forth across a pot can make the distinctive rocker stamped design. By cutting notches in the clam shell, the potters could make the dentate (tooth-like) rocker stamping shown on the large fragment from the Seip mound.

Pots with other types of stamped decorations were imported by the Hopewell people from groups living in Tennessee and Georgia. The distinctive designs on these vessels were made with carved wooden paddles like the replicas shown in the display. Sometimes the patterns are simple parallel lines or a checker-board motif such as the example from the Harness mound. The fragments from the Seip mound are good examples of the more complex designs known as complicated stamping.