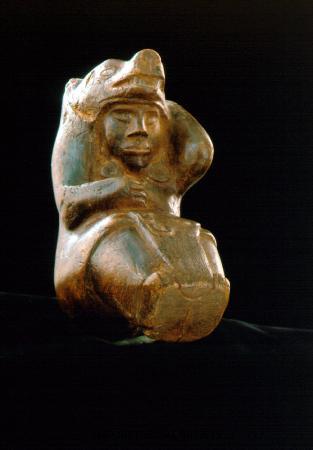 The Wray Figurine, named for a former owner, was found in 1881 by workmen digging a foundation for a building in Newark, Ohio. It is made from a solid piece of rock that weighs about 1Â½ pounds. The figure appears to be a man or woman wearing a bear skin complete with the animal's head, which the figure appears to be raising or lowering with its left hand. Bear claws cover the human fingers and toes, perhaps to make the person's transformation to bear-spirit more convincing.

In the figure's lap is what appears to be a human head with the hair flowing down between the figure's legs. The "head" is sculpted in low relief, so it also might represent a decorated bag, or even a supernatural being such as the Floating Head of Iroquois legend.

Since both the figure and the disembodied head wear Hopewell-style earspools, the sculpture is thought to be Hopewell. This conclusion is supported by the fact that the piece was beneath the largest of the burial mounds at the Newark Earthworks, a major Hopewell complex in Licking County. Archaeologists think that the figurine represents a Hopewell shaman, identified by the ceremonial regalia. The shaman may be performing a funeral or conducting some other ceremony. Because so little is known about the circumstances under which the piece was found, a more detailed interpretation is not possible.