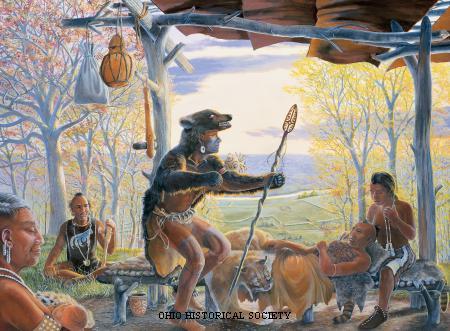 Historic Native Americans are known to have used bearskins to impersonate bear spirits in shamanic rituals. Nicholas Creswell observed such a shaman among the Delaware Indians at Coshocton in 1775. In his journal he recorded the experience:

"Saw an Indian Conjuror dressed in a Coat of a Bearskin with a Visor mask made of wood, frightful enough to scare the Devil."

The Hopewell culture sometimes made small human figures from clay. The most notable of these have been found at the Turner mound in Hamilton County, Ohio, the Mann site in Indiana, and the Knight mound group in Illinois. Three human-head effigy pipes were found with the cache beneath mound 8 at Mound City. These human figures provide important information about Hopewell clothing, hairstyles, and body painting/tattooing, areas of Hopewell culture which often are not preserved.