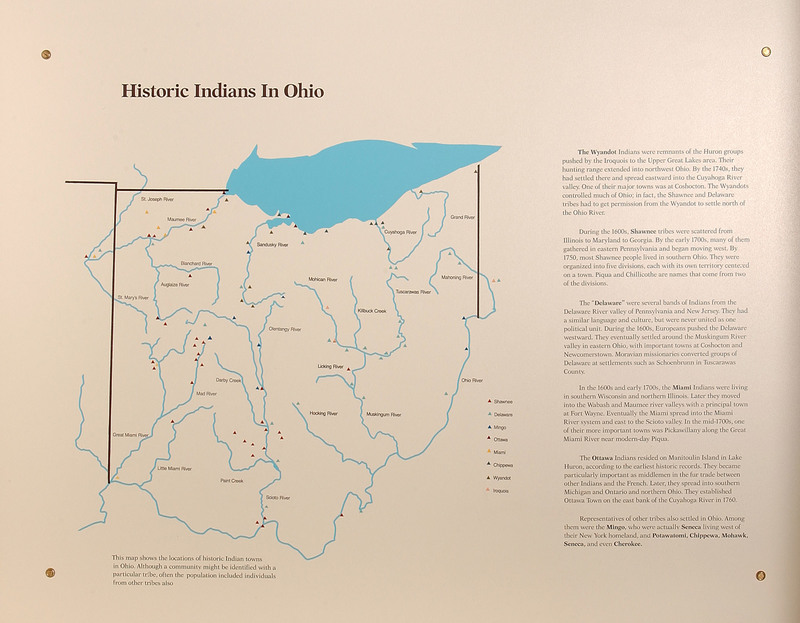 Gradually, Ohio was resettled by the Wyandot, Shawnee, Delaware, Miami, and Ottawa from nearby regions. The names by which these tribes are known are not always their native terms, but those applied to them by the English and French.

Because of wars, disease, and tribal relocations that occurred before Europeans came to this area, it is hard for archaeologists to trace direct ties between the ancient cultures described by archaeologists and the tribes that settled in Ohio during historic times. Turmoil continued after the Europeans arrived in the 1700s, as the Shawnee, Wyandot, Delaware, Miami, and other tribes fought to retain their lands. In the end, their efforts were unsuccessful.

By the mid-1800s, the remaining tribes were moved to reservations in Kansas and Oklahoma. Some of their descendants still live on the reservations; however, many Native Americans live in Ohio cities and rural areas today.

This map shows the locations and approximate founding dates of a number of historic Indian towns in Ohio. Although a community might be identified with a particular tribe, often the population included individuals from other tribes also.