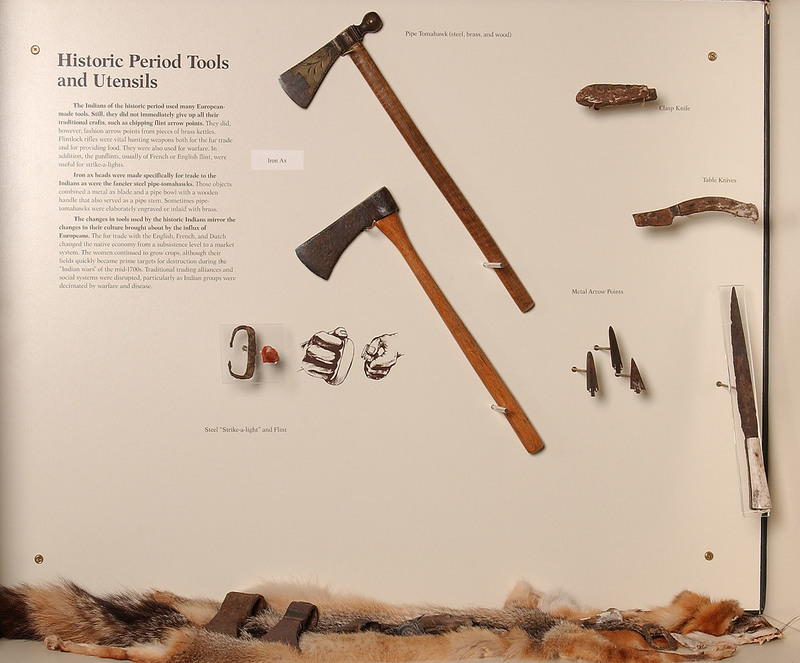 The Indians of the historic period used many European-made tools. Still, they did not immediately give up all their traditional crafts, such as chipping flint arrow points. They did, however, fashion arrow points from pieces of brass kettles. Flintlock rifles were vital hunting weapons both for the fur trade and for providing food. They were also used for warfare. In addition, the gunflints, usually of French or English flint, were useful for strike-a-lights.

Iron ax heads were made specifically for trade to the Indians as were the fancier steel pipe-tomahawks. Those objects combined a metal ax blade and a pipe bowl with a wooden handle that also served as a pipe stem. Sometimes pipe-tomahawks were elaborately engraved or inlaid with brass.

The changes in tools used by the historic Indians mirror the changes in their culture brought about by the influx of Europeans. The fur trade with the English, French, and Dutch changed the native economy from a subsistence level to a market system. The women continued to grow crops, although their fields quickly became prime targets for destruction during the "Indian wars" of the mid-1700s. Traditional trading alliances and social systems were disrupted, particularly as Indian groups were decimated by warfare and disease.